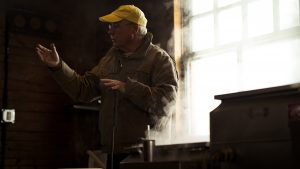 As the frozen sap in the maple tree thaws, it begins to move and build up pressure within the tree. When the internal pressure reaches a certain point, sap will flow from any fresh wound in the tree. Freezing nights and warm sunny days create the pressure needed for a good sap Harvest.

In late February, New Hampshire maple producers tap their sugar maples by drilling a small hole in the trunk and inserting a spout. A bucket or plastic tubing is fastened to the spout and the crystal clear sap drips from the tree.

The sap is then collected and transported to the sugar house where it is boiled down in an evaporator over a blazing hot fire. As the steam rises from the evaporator pans, the sap becomes more concentrated until it finally reaches the proper density to be classified as syrup. It is then drawn from the evaporator, filtered, graded, and bottled. It takes approximately forty gallons of sap to make one gallon of pure maple syrup.

The maple sugaring season in New Hampshire usually lasts about six weeks from mid-February to mid-April, depending on the location and the weather.

The NH Maple Experience is located at The Rocks in Bethlehem, New Hampshire, the North Country Conservation & Education Center for the Society for the Protection of New Hampshire Forests. ForestSociety.org